In a rapid antigen test (RTK-Ag) on Wednesday (Aug 11), he tested positive for Covid-19.

“I first did the RTK test and it showed positive, but I felt fine and did not have any indication of being infected.

“So I underwent a PCR test a few hours later and I received the results today, which indicated that I am negative,’’ said Khalid when contacted on Thursday (Aug 12).

Given that the PCR test is deemed more conclusive than the RTK test, Khalid said he would regard himself as negative for Covid-19.

Khalid said he had gone for self screening after two of his aides came down with Covid-19 recently.

“They tested positive five days apart from each other, and hence they may not have been infected by the same source,” said Khalid.

Khalid, who is also Amanah’s communications director, had been under self-quarantine from early this month after his first aide tested positive.

On allegations that he had removed his mask in a recent demonstration by Opposition MPs, Khalid said he had moved his face mask down only momentarily.

“It was hot and I was sweating. My shirt and my mask were wet and I brought it down for a short while because I was feeling very uncomfortable,’’ he explained.

Khalid added he put his mask back up after a few minutes. 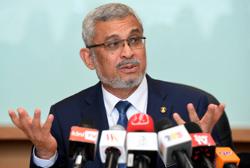