From left: Ng, Raj and Kok.

JOHOR BARU: It was double the happiness for retiree Ng Kwai Chun.

The 65-year-old had welcomed her first granddaughter into the world on July 29.

A few days later, she got a call from Star Media Group telling her she won RM3,000 cash in the first of Star Media Group’s 50 Days of Giveaways Contest series, given out by Bank Rakyat.

“It was a nice surprise following the birth of my granddaughter.

“I plan to give her a big ang pow and save the rest as the money may come in handy,” said Ng, who is from Sri Petaling, Kuala Lumpur.

Ng, who said she had been reading The Star for the past 15 years, added that she would usually start her day by spending up to two hours reading the newspaper.

She said the contest was easy.

The 50 Days of Giveaways Contest is held in conjunction with SMG’s 50th anniversary on Sept 9. 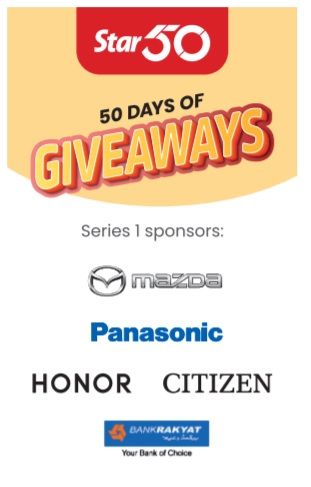 There will be five parts to the contest, with the second series ongoing.Another prize winner in the first series is Raj Chaudhuri, 47, who walked away with the Honor Magicbook X15 laptop worth RM2,299.

“I will be giving the new laptop to my 13-year-old daughter as a replacement for her old one.

“It will definitely be useful for her online classes,” said the vice president at a financial services firm.

The father of two, who has been a subscriber of The Star for a decade, said he would continue taking part in the contest to try his luck at the grand prize, a Mazda 2 hatchback.

“I took part without any expectation because I have never won any of the contests I have taken part in.

“I will be giving the prize to my parents so they can enjoy watching online videos on a bigger screen than their phones,” he added.

Kok, who started subscribing to The Star’s e-paper in August last year, said he likes reading the sports section to keep up with Malaysia’s progress in the sporting world.

“I especially enjoyed the coverage of the Olympics. Although I could not watch all the live telecasts due to work, I could still get the latest updates from The Star,” he said.

Johorean Shaick Ahmad Irfan Shaick Dawood, 22, who won a Panasonic 20L Steam Convection Cubie Oven worth RM1,899, said he would be giving the prize to his mother.

“My mum loves to cook and bake, especially during the pandemic.

“It will be a win-win situation for me because I get to enjoy her delicious baked goods too,” he quipped.

The Universiti Teknologi Petronas student said he grew up reading The Star as his parents subscribed to the newspaper before switching to the e-paper four years ago.

As a child, he loved the comics and enjoyed the business and sports section as he grew older, he added.

Participants of the 50 Days of Giveaways Contest can enter once a day for a chance to win daily prizes which include TVs, home and kitchen appliances, laptops, cameras, and watches.

Those who already won a daily prize will still have a chance to win the grand prize, the Mazda 2 hatchback.

The grand prize will be open for participation on the final day on Sept 9.

And here are the lucky winners for Series 1!

All winners have already been contacted directly via phone/email.

And here are the lucky winners for Series 2! All winners have already been contacted directly via phone/email.