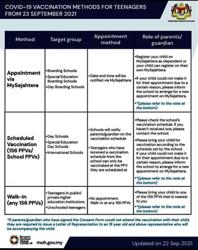 BUTTERWORTH: The Public-Private Partnership Industrial Covid-19 Immunisation Programme (Pikas) vaccination centre at Pearl View Hotel here, which started operating just a week ago, has been forced to close due to shortage of vaccine supply.

SME Association of Seberang Prai president Francis Wong, who is co-organising the programme with the hotel in Seberang Jaya here, said it has finished dispensing its 10,000 doses of Sinovac vaccine in seven days and the next batch of application is pending approval.

"We have initially applied for 10,000 recipients and submitted their names to the International Trade and Industry Ministry (Miti) and Covid-19 Immunisation Task Force (CITF) for approval.

"Although the vaccines are free from the government, we paid RM300,000 to a private medical company to run the programme as they charge a rate of RM30 per vaccine recipient.

"The first batch of vaccines arrived as planned and we started dispensing them on July 27 at a rate of 1,500 doses daily.

"To ensure continuity, applications for the second batch of 10,000 recipients were already submitted on July 25, two days before the centre started operation, but we have yet to receive approval for this from authorities.

"With 1,500 being dispensed daily, we quickly ran out of supply from our first vaccine shipment within a week before approval for the second," said Wong at the centre on Sunday (Aug 1).

The centre will dispense its last remaining vaccines tomorrow (Aug 2) and close from Tuesday onwards until new vaccines arrive.

Wong said the closure is regrettable as the association was hampered by limited reserve funds and could only apply for vaccines in small batches.

He expects approval for the names and vaccines to arrive within the next two weeks.

So far, 200 companies have applied to be vaccinated under this Pikas centre, which is the only one in Seberang Prai.

Meanwhile, Wong said a technical glitch with Miti’s computerised system further led to some companies receiving vaccination appointments tomorrow (Aug 2) although he was not furnished with that list.

"The procedure is after Miti and CITF approve a list of people to be vaccinated, we will be provided the list, usually three days before the vaccination day.

"I've checked with Miti and was informed that it was due to the 'auto allocation system' and it will reschedule these companies who have all made payments," said Wong.

Among the companies which were affected is MY CO2 Group Of Companies where a total of 36 staff members had received their appointments to be vaccinated at the Pikas centre tomorrow.

"All my workers have received their appointment through the Miti website to be vaccinated at 5.30pm tomorrow but are now informed by the centre that it will be rescheduled to a later date.

"It's unfortunate for such a mishap to occur as we've all paid for it and are looking forward to being vaccinated after work tomorrow.

"I hope Miti will ensure operators of vaccination centres are financially strong to operate it and not use our payments to finance their operation on a short term basis," its chief executive officer Louis Ooi said.

"About 200 employees, almost everyone in the company, have prepared to go for their vaccination.

"We have chartered five buses to the vaccination centre," he said.