Noh Omar: No point debating the Emergency in Parliament PETALING JAYA: There is “no point” discussing the Emergency any further if the six emergency ordinances have indeed been revoked, said Umno’s Tan Sri Noh Omar.

The Tanjong Karang MP said discussing issues surrounding the Emergency in the Parliament sittings would not be productive, as such discussions would be rendered academic.

He also said that the Yang di-Pertuan Agong is the one who has the authority to revoke the ordinances.

“If it is true that the emergency has been revoked or cancelled, there is no point we discuss the matter anymore.

“I’m telling the truth. We are wasting so much time, look how much time we have wasted (talking about this)?” he said in the Dewan Rakyat on Tuesday (July 27).

He added that his appointment to the independent emergency committee, which was to advise the King on when the Emergency should end, would also be pointless.

“If this is the case (with the emergency ordinances revoked), there is no point in me being appointed in this committee.

“The decision to extend or revoke the Emergency should be left to the Agong,” he said.

However, Dewan Rakyat Speaker Datuk Azhar Azizan Harun said that the matter would be raised in Parliament on Monday (Aug 2).

“On Monday we are discussing the matters related to the emergency, so YB can bring it up on Monday,” he said to Noh Omar. 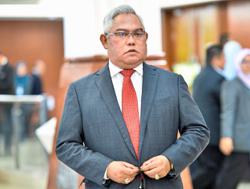