He said police identified 31 vehicles and 30 to 45 participants involved in Saturday's (July 24) convoys in several parts of the country.

Comm Abd Jalil said police are in the midst of tracking down the others.

It was reported that several participants of the convoy have been summoned to have their statements recorded.

The black flag convoy was organised by the Secretariat Solidarity Rakyat to gear up for the @Lawan rally scheduled for next Saturday (July 31).

The convoys were held concurrently all over the country including Batu Pahat, Ipoh, Temerloh and Kuala Lumpur.

On Friday (July 23), Dang Wangi OCPD Asst Comm Mohamad Zainal Abdullah warned the public not to be involved in the convoy.

"Any gathering or social activity is prohibited as the movement control order is still in place. 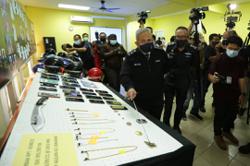