The offences include cross-border travel without permission/eating at premises, no social distancing, failure to register when entering premises, failure to abide by the movement control order, and premises which did not follow SOP.

Of those nabbed on Wednesday (July 21), 449 individuals were slapped with compound notices, 68 were remanded and eight were released on bail.

“Enforcement authorities issued closure orders on 34 premises comprising four factories and 30 business premises for failing to comply with the SOP,” he said on Thursday (July 22).

Ismail Sabri said that 455 individuals had returned to Malaysia on Wednesday and all were sent to observe mandatory quarantine at government-designated stations.

Since July 24 last year, a total of 253,572 individuals had returned and were sent for quarantine at 83 hotels and 11 training institutes nationwide.

A total of 129 disinfection exercises were carried out nationwide on July 21 at 52 red zones, two amber and five yellow zones.

Cumulatively 33,375 of such operations had been carried out since March last year including at business premises, housing areas, public spaces, supermarkets and government buildings. 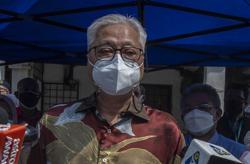