KUCHING (Bernama): A food delivery rider risked his life to save a family of four trapped in their vehicle in an incident on Saturday (July 17).

On his way to deliver food to his customer at Bandar Baru Samariang around 9.30pm, Mohamad Khairul Gani, 32, stopped his motorcycle when he saw several vehicles parked by the roadside in Jalan Camar, here, before he saw a vehicle that had overturned and landed in a nearby drain.

"By the time I arrived, I did not see anyone going down into the drain, so I decided to jump into the drain even though it was dark.

"I opened the vehicle’s door and pulled out two children and a man before helping a woman out of the vehicle," he said.

In the incident, four family members survived after their car skidded before overturning and landing into a seven-foot (2.13m) deep drain in Jalan Camar, here.

According to Mohamad Khairul, after ensuring that the family was safe, he made his way to his customer’s location.

He said the customer was angry at him for the one-hour delay but all was well when he explained what had happened.

"The customer understood and accepted the order,” he added.

Mohamad Khairul and eight others were commended for their bravery in saving the family and recognised as Bomba (Fire and Rescue) heroes by the Sarawak Fire and Rescue Department on Wednesday (July 21).

Speaking at the event, Khirudin said the first five minutes are critical in any incident or accident.

He said the quick action of the nine 'Bomba Heroes’ saved the day which otherwise may have turned into a tragedy.

"Nowadays, most members of the public prefer to take photographs and be 'reporters' during an incident. This is what worries us.

"(But the actions of) our nine heroes were excellent... they were willing to jump in the dark and risk their lives to save others," he added.- Bernama 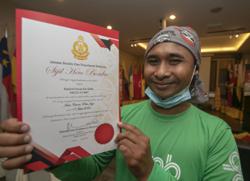