PETALING JAYA: The two sen per kilowatt hour rebate for all Tenaga Nasional Bhd (TNB) holders will be continued for another six months, the government has announced.

The move is to assist more Malaysians during the Covid-19 pandemic, it added.

This means that the two sen per kilowatt hour rebate will take effect for all TNB account holders from July 1 till Dec 31 this year, said the Energy and Natural Resources Minister.

“The additional rebate will enable all TNB account holders to enjoy an average discount of 5% during that period,” he told a press conference held via Zoom yesterday.

In line with the implementation of the electricity tariff setting mechanism in Peninsular Malaysia since 2014, he said adjustments on electricity generation cost must be implemented every six months through the Imbalance Cost Pass-Through (ICPT) mechanism.

“This means that the electricity rebate rate that can be released to consumers is 1.13 sen kilowatt per hour compared to the rebate period from January to June this year, which was two sen per kilowatt.

Shamsul Anuar said Kulim High Technology Park (KHTP) non-domestic account holders, whose electricity is provided by NUR Power Sdn Bhd, will be getting a two sen per kilowatt rebate from July 1 till Dec 31 this year.

“This is the first time a non-domestic user at KHTP has benefited from electricity rebates since the Incentive-Based Regulations tariff setting mechanism was implemented in 2017.

“This rebate is implemented as there is a drop in fuel and gas prices, TNB’s bulk electricity supply in the first half of 2021, and savings from adjustments of the actual fuel cost from July till December last year,” he added.

Shamsul Anuar also said the hardcore poor with an income lower than RM1,169 per month who are registered in the e-Kasih system will be eligible for a RM40 electricity rebate.

The first rebate of two sen per kilowatt hour for all TNB account holders was announced on Dec 23 last year and took effect from Jan 1 this year. 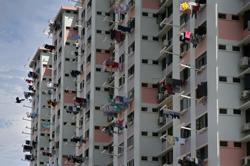