BALIK PULAU: Police have detained a suspect who allegedly stole a pickup truck before leading them on a high-speed chase that culminated in a scuffle in Bayan Lepas on Wednesday (June 23).

Balik Pulau OCPD Supt Kamarul Rizal Jenal said the incident occurred after the owner of the vehicle witnessed the suspect stealing his vehicle at a shopping mall in Bayan Baru.

"The owner said the incident happened quickly and he could not do anything to prevent his vehicle from being stolen," he said.

Supt Kamarul said a police mobile patrol vehicle was alerted, ensuing in a 10km high-speed chase before the stolen vehicle crashed near a petrol station in Jalan Sungai Tiram in Bayan Lepas.

Supt Kamarul said the cornered suspect did not go quietly, putting up a fight that resulted in injuries to both himself and one of the policemen.

He added that the suspect and injured policeman were sent to Penang Hospital for treatment. 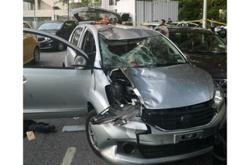 KJ: Always be on guard
No Barisan MPs have signed SDs since 'Sheraton move', says Shahidan
Last Covid-19-positive escapee recaptured in Papar, Sabah
Covid-19: 18.2% of cases in Sabah on Monday (Aug 2) are those who have been vaccinated
Covid-19: Cluster found for second time in Pasir Mas village in Kelantan
Melaka focussed on pressing state-level issues, says Idris Haron
Footage of Anwar and Dr M together gets tongues wagging
Covid-19 Watch: 8,000 Melaka retail sector workers to get jabs from mid-August
Negri cops warn of scam tactic via online job offers
Covid-19: Another grim record with 219 deaths on Monday (Aug 2)