PETALING JAYA: Congratulations have poured in on social media for Malaysian powerlifter Bonnie Bunyau Gustin, who smashed a world record when representing the country at the Para Powerlifting World Cup in Dubai.

He was among many like Ganesh Reddy and Joseph Paul Toyat, who also took to Facebook to congratulate Bonnie.

“Congratulations Bonnie on your achievement breaking the world record,” he said.

Similarly, Shamsudin Sepawi also congratulated him on Facebook by saying "proud of you!"

The Kuching-born Bonnie had set a new world record and won the gold medal when he lifted 230kg in the men's above 72kg category, breaking the 229kg record set in 2019 by Iranian Rostami Roohallah.

It was the second Para Powerlifting World Cup win this year for Bonnie as he lifted 226kg when placing first in the men's above 72kg category in Bangkok in May.

With his latest achievement, Bonnie should be heading to Tokyo as the No. 1 ranked para lifter in his category.

Meanwhile, Instagram user @anwariwan17 said that para-athletes should be given more sponsorship for their contributions to the country.

“Sponsor Paralympic athletes better. Confirmed dapat (will get) gold medals for the country,” he said.

Additionally, Instagram user @sitizubaidahismail deemed him a “Malaysian hero”, when offering her congratulations. 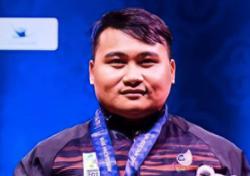