KLANG: Another man who was alleged to have a role in seeking bribes for over 110 bank loans amounting to RM18mil issued in the last two years has been arrested by the Malaysian Anti-Corruption Commission (MACC).

The 35-year-old bank employee is the latest suspect held by the MACC on Monday evening.

Six others were arrested last week for similar allegations.

A seven-day remand order was issued to the man by magistrate Parvin Hameedah Natchiar at the Shah Alam Magistrate’s Court yesterday to enable MACC to question him further on the allegation of soliciting and receiving bribes from personal loan applicants between 2018 and 2020.

The man was detained after MACC recorded his statement pertaining to the alleged bribes at their Selangor office on Monday.

The court also granted an additional four-day remand order to six other bank employees, aged between 36 and 45.

The extension was to enable MACC to question the suspects further.

All seven men, employed at several banks in the Klang Valley, were investigated for allegedly seeking inducements involving 110 loan transactions amounting to RM18mil.

These men were alleged to have asked for between 15% and 35% kickbacks from the principal amounts sought by the applicants who did not qualify to borrow money from the respective banks. 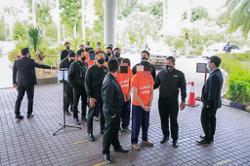