State of Emergency not working in combating Covid-19, says Shafie

KOTA KINABALU: Sabah’s ex-chief minister Datuk Seri Mohd Shafie Apdal said the state of Emergency in Malaysia has not been effective in combating Covid-19, calling it to end to allow Parliament sittings to reconvene.

In “The Unity Show Live: A Nation In Despair” interview streamed live in Facebook on Wednesday night (June 9), the Parti Warisan Sabah president stressed that Covid-19 cases including death rates continue to rise despite the move.

“I feel we do not need the state of Emergency; it was proven since the period started that numbers continue to increase. This instrument did not bring the impact we hoped for.

“If the state of Emergency can fix the pandemic, by all means I would support it.

“But there is no point to continue it, and no other nations have declare such a move to overcome this problem.

“When we are not in (Parliament) session, we cannot pose questions, opinions and suggestions in a proper manner. I hope the rulers of this country can take it seriously, from the (Covid-19) data we have seen, ” said Shafie, who was the special guest for the online talk show.

The state of emergency was declared earlier this year, effective from January 11 to Aug 1, where no Parliament and state legislative assemblies sitting are to take place, until a time set by the Yang di-Pertuan Agong.

The King had granted audiences with leaders of major political parties and to get their views on current national matters, where Shafie is scheduled to meet the King on Thursday (June 10).

Shafie, who is Semporna MP, reasoned that as elected representatives, they could not voice their views because of no sittings and had to opt for the use of social media.

“But then we got questioned why mention it during the state of Emergency.

“However, during Parliamentary sittings, we have the right to do so.

“Right now, the people do not have a platform to voice their plight and to highlight various matters, since elected representatives cannot bring them to sittings, ” he said further.

Asked to comment on the current state of economy in the country, he said it has suffered as companies go bankrupt or closed down, while many potential investors do not think it was a good idea to go into business right now.

“Those with financial (capital) do not have the confidence or assurance to conduct businesses ... When I engage with them, they say it is not the right time to spend their money.

On a question of what he would do if he was the Prime Minister tasked with handling Covid-19, Shafie said the focus is to save the lives of all Malaysians, and this can be done by simplifying the distribution of vaccines. 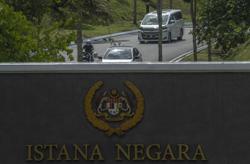