Khairy: Five new mega vaccination centres to be set up in Klang Valley from June 7 The coordinating minister for the National Covid-19 Immunisation Programme said that from June 7, several new mega vaccination centres would be set up.

"Three will be set up in Selangor and two in Kuala Lumpur," he said on Sunday (May 30) during a visit to the country's first mega vaccination centre at the Malaysia International Trade and Exhibition Centre (Mitec).

Khairy added he would be going to Penang and Johor next week to discuss the opening of more mega PPVs.

He said the Mitec mega PPV, which opened on Monday (May 30), would be able to vaccinate 2,000 people per day.

He added that the aim was for Mitec to vaccinate more than 6,000 people per day if more halls are used.

"We started with 2,000 first because we are still in phase two vaccinations for the elderly.

"We do not want overcrowding to happen. In a week's time, when the situation stabilises, we will look at increasing the capacity in Mitec," he said.

Separately, he said there would be a new helpdesk feature on the MySejahtera app that would allow people to cancel or change their vaccination dates.

He added that there would also be a feature released soon for pregnant women and nursing mothers.

Meanwhile, Khairy also said that there will be a discussion with the Saudi Arabian government on allowing leeway for those who have been vaccinated with the Sinovac vaccine to perform their haj.

Currently, he noted that the Saudi Arabian government only acknowledged the Pfizer-BioNTech and the AstraZeneca vaccine.

Additionally, Khairy also said that they will submit a joint paper between the Science, Technology and Innovation Ministry (Mosti) and the Home Ministry soon on how they would approach the vaccination process for undocumented migrants.

“Notwithstanding the announcement yesterday, I will be discussing with the Home Minister on what the government should give priority, which is public health right now, ” he said. 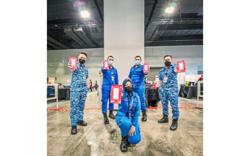