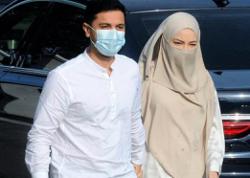 SEREMBAN: Barely a day after claiming trial at the Magistrate’s Court here to a charge of flouting the Covid-19 standard operating procedure when shopping in Nilai, TV host-entrepreneur Neelofa is in the news again as the police investigate her for failing to put on a face mask when she arrived at the court complex for the hearing.

Seremban OCPD ACP Mohd Said Ibrahim said a police report had been lodged against the 32-year-old, whose full name is Noor Neelofa Mohd Noor, claiming she might have violated the SOP by not wearing a mask beneath her veil when she attended her case on Thursday.

“A Kosmo Online report went viral on Thursday, claiming Neelofa, who had her niqab on, did not wear a face mask when at the Magistrate’s Court.

“We have received a police report claiming she failed to adhere to the Health Ministry’s SOP, which applies to all individuals, ” he said in a statement.

However, he did not say if or when she would be called in to have her statement recorded.

ACP Mohd Said said Neelofa was being investigated under Section 269 of the Penal Code and Rule 17(1) of the Prevention and Control of Infectious Diseases Regulations (conditional movement order) 2021.

ACP Mohd Said said the National Security Council had also made it compulsory for face masks to be worn in public areas from Aug 1 last year.

Neelofa and her 26-year-old husband Muhammad Haris Mohd Ismail, better known as PU Riz, were charged at the Magistrate’s Court here on Thursday with breaching the conditional movement control order.

The couple pleaded not guilty to a charge of failing to scan their details via the MySejahtera app or register manually before entering a carpet shop located at the Nilai 3 Industrial Area at 4pm on May 2.

Muhammad Haris, a preacher, also claimed trial to another charge of failing to wear a face mask in a public place at the same place and time.

They were charged under Rule 19 of the Prevention and Control of Infectious Diseases Regulations (conditional movement order) 2021, which provides for a fine of not more than RM50,000, jailed not more than six months or both, upon conviction.

On April 27, Neelofa was issued a compound for failing to practise physical distancing during her wedding ceremony on March 27 and for breaching interstate travel regulations by going to Pulau Langkawi and taking part in activities not permitted by the police.

She was fined RM20,000 for both infractions while her husband was issued a RM10,000 compound for flouting interstate travel rules.