Retiree who just wanted a special Raya with grandkids loses RM14,000 to scammer

MELAKA: An 80-year-old retiree who applied for a loan so that he could celebrate Hari Raya with his grandchildren ended up losing RM14,000 of his life savings to a scammer.

The victim also has to endure the double blow of being unable to celebrate with his loved ones because of inter-district and interstate travel restrictions.

"The victim initially sought a loan of RM10,000 but instead was made to pay RM14,320 as processing fees for the nonexistent loan," he said on Monday (May 10).

Supt Sundra said the victim's wife transferred the amount in instalments into several bank accounts provided by the scammer between April 5 and May 6.

He said the scammer also requested the victim to disclose all his personal details.

Supt Sundra said the victim lodged a police report here on May 8 after realising he had been cheated when the loan was never disbursed as promised.

"My team is expediting the investigation to close in on the heartless culprit who dashed the festive mood of a senior citizen," he said. 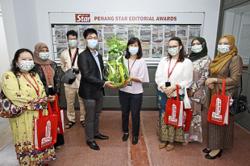