Sabah Deputy Chief Minister Datuk Seri Jeffrey Kitingan poses at a natural pond on the summit of Mount Kinabalu during his climb up the mountain on Friday.

Despite heavy rain at the 4,095m summit, the veteran politician led a group of 50 people to reach the top as part of his Jom Sihat programme while also promoting ethnic Kadazandusun and Murut costumes in conjunction with Kaamatan month.

"It was a very difficult journey especially after Layang-Layang and the last climb to the summit from Panalaban.

"Imagine climbing on big stones for 6km with big steps up and up. There are many steep wooden steps.

"Then the final phase is from Panalaban, climbing granite rocks with ropes, before manoeuvring loose stones for almost 3km up to the summit," said Jeffrey.

Friends were critical about his plans to climb the mountain as he continues to suffer the side-effects of a 2007 car crash, which injured his spine and confined him to a wheelchair for four months.

However, despite concerns about his physical ability, Jeffrey said that he was determined to climb the revered Kinabalu, the resting place of their ancestors.

Part of Jeffrey's preparation was to take brisk walks around his house in Inanam. 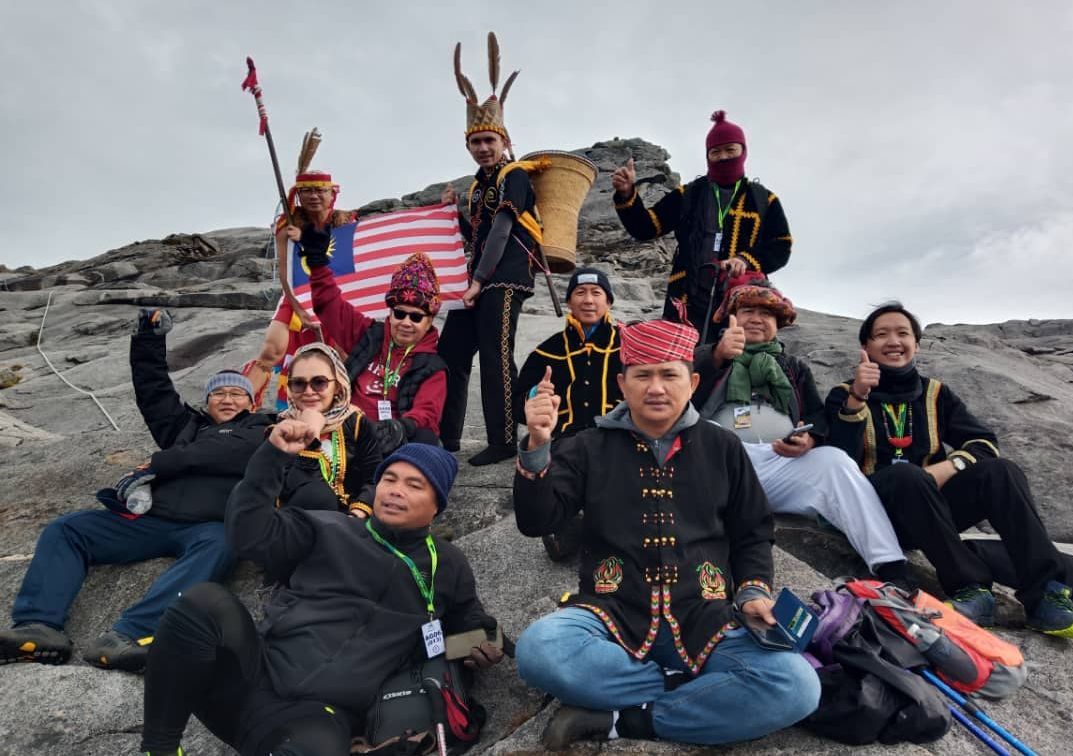 Sabah Deputy Chief Minister Datuk Seri Jeffrey Kitingan (sunglasses) with some of his expedition members posing for a group photo at the summit of Mount KInabalu.

The expedition began on Thursday (May 6) morning where the group reached the midway point at Panabalan Camp at around 4pm.

They then began the ascent to the summit at 2am Friday (May 7) morning before reaching Low's Peak at 6.30am and making the descent back to Timpohon Gate by 7pm.

Jeffrey said that they almost did not make it to the summit due to heavy rain but the chief ranger shifted the ascent to the summit from 2am to 3.30am in hopes that the weather would improve. If not, the summit climb would have to be cancelled.

"I strongly believe that Akinabalu (a reference to the mountain) will not disappoint us. He is just clearing the path for us and we will be rewarded by clear weather. True enough it was a fantastic scenery up there.

"In the end, I'm glad I was able to participate in this expedition. I've always believed that we can all achieve whatever we set our minds to. If you really want something, go for it.

"Climbers will be tempted to give up many times during the ascent. The key is simple. Never, ever say never. Most importantly, ignore the critics and the sceptics," said Jeffrey at the end of the climb.

He was accompanied by his wife Datin Seri Cecilia Edwin.

At the summit area, they wore Kadazandusun and Murut costumes as part of their programme in conjunction with the month long Kaamatan or Harvest Festival.