KUALA LUMPUR: The new Inspector-General of Police Datuk Seri Acryl Sani Abdullah Sani is on the right track by focusing on strengthening integrity among the police.

"It is important to breed integrity among the police, as well as build a work culture based on professionalism, ethics and efficiency.

"Integrity and proper work culture will strengthen and bring back public confidence towards the force," he said on Saturday (May 8).

Praising the direction that Acryl Sani is taking the police, Lee also called on the government to ensure that the police are provided with the necessary allocations.

"Sufficient allocations will help ensure the police are people-centric and focused on serving the people and the nation," he added.

Lee also said he hoped the new IGP would be able to focus on the welfare of members of the police force, especially in terms of housing.

"Addressing the issue of sufficient quarters, ensuring proper maintenance and improving existing accommodation is crucial, as it will give the personnel peace of mind," he said.

Lee also said the issue of mental well-being of the men and women in the police should be addressed.

"The mental well-being of personnel and officers should be enhanced through conducting various programmes such as ways to deal with stress, as the job is quite stressful," he added.

The new IGP had previously said that the police will step up its in-service training to keep officers up-to-date on how to deal with current issues, besides having town hall sessions to engage local communities.

"We want to serve the public, not burden them," said Acryl Sani, who emphasised courtesy towards the people.

He said in-service training would be held at least once a week for about two hours.

Acryl Sani, who took over the IGP post on Tuesday (May 4), addressed issues ranging from abuse of power and courtesy to the public, to repairing lifts in police buildings.

He vowed that wrongdoing in the police force would not be swept away, as transparency was key. 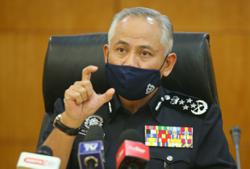