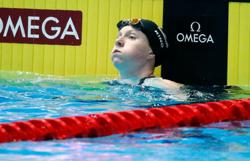 "I congratulate Pandelela for making Malaysia proud on the world stage by winning the first gold medal for our national squad this year.

"Her achievement has done us all proud. It is a bonus for our national squad, particularly as our athletes had gone without any competitions after almost a year," he said in a statement on Thursday (May 6).

Pandelela, who will head to her fourth Olympics in July, became the first Malaysian to win gold at the diving World Cup after finishing with 355.70 points in the women's 10m platform final on Wednesday (May 5).

He added that Pandelela also proved that Sarawak athletes were able to compete at international standard with those from more developed countries in terms of sports science, diet and technology.

"On behalf of the Ministry, I call on our local athletes to double their efforts in training and be better prepared to spearhead our country's challenge in international competitions," he said.