School’s out: A security guard closing the gate of SMK Padang Enggang in Kota Baru, Kelantan, after the announcement of the school’s temporary closure. — Bernama

KOTA BARU: The Kelantan Education Department has ordered all schools and educational institutions in seven districts placed under the movement control order to be closed from now until April 24.

Its director Zulkernai Fauzi said the decision was made on Saturday at the Kelantan special disaster management committee meeting on Covid-19 enforcement.

He said the committee recommended that the department close all schools and educational institutions under the Education Ministry in the seven districts placed under MCO.

“The ministry, taking into account the current situation, has decided that all schools in the seven districts placed under the MCO must be closed for a period of seven days from April 18-24.

“All students residing in hostels must stay put, ” he said when contacted.

Zulkernai added that the directive would be communicated to all school administrators for further action.

At the same time, he said efforts should be taken to ensure that teachers would be able to implement home-based teaching and learning based on the suitability and access during the school closure.

Zulkernai added that all district education officers must also continue to monitor all the schools to ensure that the relevant standard operating procedure was complied with. 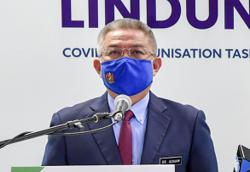