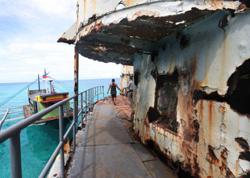 The Bahamas-registered cruise which was detained by the Malaysian Maritime Enforcement Agency for illegal anchoring at Tanjung Siang, Kota Tinggi on April 17, 2021.

Johor MMEA director First Admiral Nurul Hizam Zakaria said that 12 vessels were detained for harbouring illegally off Johor over a 10-day period that began on April 8.

He said that the latest vessel is a Bahamas-registered cruise liner which was spotted near here by a MMEA patrol unit at around 12pm on Saturday (April 17).

Nurul Hizam added that no passengers were on board the cruise liner when it was found by the MMEA.

“The cruise liner was detected 14.5 nautical miles northeast of Tanjung Siang. It was carrying 63 crew members of various nationalities including those from Malaysia, China, Croatia, Finland, Indonesia, Nepal, Philippines, Sweden and the United Kingdom, ” he said.

Nurul Hizam said the case is being investigated under Section 491(B)(1)(l) of the Merchant Shipping Ordinance 1952 for illegal anchoring without a permit from the Marine Department.

He added that the agency detained a total of 52 vessels of various makes and origins since January, including local ships which had anchored without a permit in Johor waters.

“Ship and boat operators are urged to obtain all the necessary documents from the local authorities before conducting any shipping activities or they can immediately leave Malaysian waters if they refuse to do so.

“We will not hesitate to take action against anyone who fails to comply with the country’s laws in efforts in order to safeguard our seas, ” he said.