No stone unturned: Comm Ayob said Johor police have not ruled out the possibility that more enforcement officers will be arrested.

JOHOR BAHRU: Raids carried out under Ops Pelican 3.0 by police to storm the suspected Puchong hideout of the "Nicky Gang" on March 20 and 21 were conducted according to the standard operating procedure (SOP) of the Royal Malaysia Police (PDRM), says Datuk Ayob Khan Mydin Pitchay

The Johor police chief said 45 units of the Trigon Residence Setiawalk in Puchong were searched in the raid by breaking the locks on doors, and the raids were based on credible reasons and intelligence obtained.

This included suspecting the condominium of being a hiding place of the gang to stash away documents and valuables.

"The raid and search were according to the provisions of the Criminal Procedure Code (Act 593) and the Security Offences (Special Measures) Act 2012 (Act 747), ” he said in a statement here on Saturday (April 17).

Ayob Khan issued the statement after 17 unit owners at the condominium lodged police reports seeking compensation for their damaged doors and grills following the raid.

One of the owners who wished to be known only as Wendy, claimed that the total estimated damage is about RM30,000.

Liow was last seen on March 20 at Setiawalk in Puchong, where the syndicate reportedly ran its operations from 48 apartment units there.

Lawyer Tiew Way Keng, who was representing the owners of the condominium units, said they were not against the police doing their work but wanted them to be accountable for their actions.

“More than one month later and the victims still don’t know who is responsible for the damage, ” she said on Friday (April 16), adding that she will be writing in to the police on the matter.

The raids involved 220 officers and men from various departments, including the Johor police contingent headquarters and the Fourth Battalion of the General Operations Force from Cheras, Kuala Lumpur.

The Nicky Gang is headed by 33-year-old Datuk Seri Nicky Liow, who is wanted by police for allegedly being involved in various organised crimes such as fraud syndicates and money laundering.

Nicky is also the founder of Winner Dynasty Group with its headquarters in Setiawalk, Puchong. 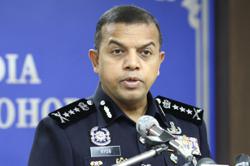