PETALING JAYA: The fasting month has started for the Muslim community in Malaysia, with most states allowing bazaars and terawih prayers.

Last year, Ramadan bazaars and terawih prayers in mosques were cancelled due to the pandemic.

But while these activities are now allowed to proceed this Ramadan under strict conditions, the authorities and health experts are urging people to remain vigilant against the virus.

With the Covid-19 threat far from over and new cases still above the 1,000-mark, some states like Kelantan and Sabah have decided to ban Ramadan bazaars this year.

Kelantan has even said that it will not allow terawih prayers and official state government functions.

Over in Sarawak, there will be no Ramadan bazaars at the Satok, Semarak and Sukma Ria areas.

The Health Ministry also said the country’s Rt value, which is the infectivity rate, has risen to 1.06 on April 11.

“Terengganu has the highest Rt value at 1.56.

“Obey the standard operating procedure, stop the cases from increasing, ” it tweeted yesterday.

For instance, he said that it was better for vulnerable groups to stay at home to perform the terawih prayers instead of going to the mosque.

“As for Ramadan bazaars, it is best if there is a limit on how many people may enter at any given time.

“All food should be for takeaway with transactions conducted through e-wallet payments, and it is better to reduce the time wandering around the bazaar without a specific aim, ” said Dr Mohammad Farhan from the Selangor Covid-19 Task Force Committee.

He added that it was better to refrain from breaking fast in a large group and those who wished to contribute sadaqah (charity) should do it via drive-thrus.

He, however, warned that indoor gatherings may also lead to a higher risk of virus transmission, pointing out that many Covid-19 clusters emerged from workplaces due to poor ventilation and central air conditioning.

“The situation is similar when those parameters are the same, be it at a family gathering or a special event. The only way we can break the chain or prevent infection is to move our indoor gatherings outside, where there is better ventilation and lower risk of transmission, ” he added.

“All of us should continue complying with the SOP if we decide to go for the Ramadan bazaar, to have iftar (breaking fast) outside or when having our terawih prayers.

“We should minimise social gatherings, particularly during the breaking of fast, ” she said.

She added that people must not let their guard down when they have guests over at home.

“Those who wish to have kenduri or gatherings with family should take care of the SOP, and please do not involve the elderly, ” she said.

Universiti Malaya virologist Prof Dr Sazaly Abu Bakar said this would be the first year where Ramadan would be observed under certain restrictions.

“The situation should be all right if the stringent SOPs are followed, and if enforcement is also strict, ” he said.

He also proposed that Ramadan bazaar traders be screened for Covid-19 regularly to ensure they do not become unknowing spreaders of the virus.

According to the National Security Council (NSC) guidelines, Ramadan bazaars are allowed to operate between 3pm and 8pm.

Patrons must adhere to the SOP under the supervision of the authorities alongside members of the Malaysian Volunteer Corps (Rela) and the local council.

Most states, including Perak, Negri Sembilan, Melaka, Pahang and Johor, are allowed to hold Ramadan bazaars under the “new normal”, though visitors have to don face masks and adhere to physical distancing.

The NSC also allowed terawih prayers to be held, though the SOP will be subjected to the respective state religious authorities. 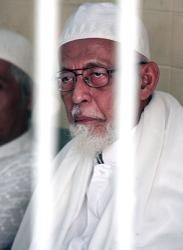