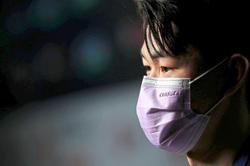 KUALA LUMPUR (Bernama): Reigning All England champion Lee Zii Jia missed out on receiving the first dose of the Covid-19 vaccine at the Desa Tasik Sports Complex Hall in Cheras on Tuesday (April 13) due to illness.

He was supposed to be among the first batch of 264 athletes and officials who are eligible for and involved in the Tokyo Olympics (July 23-Aug 8) and Tokyo Paralympics (Aug 24-Sept 5), to receive their first dose of the Pzer-BioNTech vaccine jabs today.

National men’s singles head coach Hendrawan said the 23-year-old Zii Jia had been ill for the past two days, most probably due to fatigue after taking part in many functions since his All England success last month.

“On Monday (April 12), we checked with the doctors at the National Sports Institute (NSI), and they said he won’t be able to receive the vaccine jab today.

"It’s normal fever, his swab test came back negative and he has also done blood tests for suspected dengue fever.

“His preparation isn’t affected, just that he may be tired or hasn’t had enough rest because he has had to attend so many functions in the past few days since returning from All England. We hope he will be fine, ” he told Bernama when met at the National Covid-19 Immunisation Programme of the Youth and Sports Ministry today.

Hendrawan also admitted that Zii Jia has yet to reach his peak form since returning from Birmingham on March 23, as he had to undergo quarantine for a week and only managed to train half a day most times because of the invites to various functions.

However, he said the shuttlers’ "honeymoon" phase was over and full training would resume this week in order to prepare the world No 8 for the India Open (May 11-16), Malaysia Open (May 25-30) and Singapore Open (June 1-6) as preparation for the Tokyo Olympics.

Sharing his experience after receiving the Covid-19 vaccine, Hendrawan said he now felt more confident of his and the players’ safety as they had to take part in many tournaments overseas.

“I am glad I have been vaccinated and, overall, the process went smoothly. This is one form of protection for the team, hopefully with this vaccine we will be safer as we prepare for the Tokyo Games, ” he said. - Bernama