ECRL records first tunnel breakthrough in Paka ahead of schedule 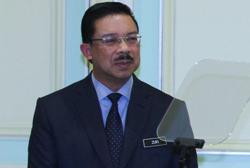 A proud moment: Mohd Zuki flying the Jalur Gemilang after officiating the final blasting of the tunnel in Paka. (Inset) The view from inside the Paka tunnel which was excavated six months ahead of schedule. The tunnel is 11.8m high with a 12.9m width, enough to accommodate two railway tracks in the future. — Bernama

PAKA: The East Coast Rail Link (ECRL) project has marked another major milestone with the first tunnel breakthrough along the 665km interstate line.

Yesterday, the main contractor for the project, China Communications Construction (ECRL) Sdn Bhd (CCC-ECRL), successfully blasted away the final few metres of the Paka tunnel to allow smooth passage of both cargo and passenger services from Kota Baru all the way to Port Klang, traversing Kelantan, Terengganu, Pahang and Selangor in the process.

Measuring 1.1km, the completion of the single-bore Paka tunnel ahead of schedule was an impressive feat.

Malaysia Rail Link Sdn Bhd (MRL), a wholly-owned subsidiary of the Ministry of Finance Incorporated, is the project and asset owner of the railway that is scheduled to open for use by 2027.

MRL chairman Tan Sri Mohd Zuki Ali, who officiated the final blasting of the tunnel, said the achievement was the result of about 620,000 manhours spent on drilling and blasting.

The work, to punch through moderately weathered granite, was carried out by Malaysian contractors.

Mohd Zuki credited the hard work and commitment of about 100 ECRL personnel at all levels for tunnelling works to yesterday’s successful breakthrough.

“Today’s tunnel breakthrough is a result of mutual assistance and collaboration between MRL and CCC-ECRL that put into practice top notch technology, equipment, planning and safety in tunnel engineering and construction, ” he said, adding that the second ECRL tunnel breakthrough in Dungun, Terengganu, was expected in mid-June.

“The ECRL project is in for some exciting times with multiple tunnels totalling 14.9km in length taking shape in Section B (Dungun-Mentakab).

“Many of these tunnels have reached optimal excavation progress, and will further complement the project’s overall progress at 21.39% as of March, ” he added.

Prior to yesterday’s breakthrough, excavation works for the Paka tunnel was at 98.5%, while the tunnel’s permanent lining made by sprayed concrete already covered up to 850m.

With a height of 11.8m and width of 12.9m – enough to accommodate two railway tracks in future – this tunnel allowed the project to avoid open major cutting of the hill, allowing the forest reserve above to remain intact even as trains whiz by to bring passengers from Kota Baru to the Gombak integrated transport terminal (connected to the Kelana Jaya LRT) in about four hours.

Excavation works commenced in April 2018, but was put on hold in July that year due to renegotiation of the project between the Pakatan Harapan administration and China, after a change of Federal Government in May that year.

Excavation resumed in August 2019 following the relaunch of the ECRL project on July 25,2019.

“Despite major challenges faced during the construction period of work which included suspension for nine months and strict SOP for managing Covid-19 that reduced the working strength and period, the team at Paka tunnel managed to achieve the breakthrough six months ahead of schedule, ” said CCC-ECRL’s managing director Bai Yinzhan at the ceremony that was also attended by MRL CEO Datuk Seri Darwis Abdul Razak, members of MRL’s board as well as senior Terengganu state officials.

Bai thanked the ECRL project team from both sides for their commitment in overcoming setbacks to push the project ahead to ensure it remains on track.

“We faced many challenges in the past 12 months, including the pandemic and severe flooding in the east coast.

“But our workers, together with our local and bumiputra project partners, have put in relentless efforts to ensure everything stays on track while adhering to Covid-19 SOP to keep the workplace safe, ” he said.