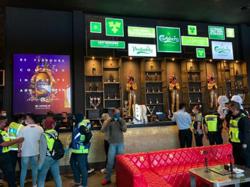 "We also detained seven Thai women for suspicions of possessing fake travel documents while four Bangladeshi men and a Thai woman were also arrested for not having valid travel documents," he said when contacted on Saturday (April 10).

He added that those detained and compounded were aged between 20 and 50.

"The club was quite hidden and they only accept regular customers. They also have ample security and CCTV surveillance," he said.

"We will take stern actions on the violators," he said.

He also urged those with information on any SOP violations or crimes to contact the nearest police station.