PETALING JAYA: Over 10,000 jobs will be up for grabs at the Program Kerjaya UP event on Monday (April 12), in a bid to reduce the unemployment rate among vulnerable urban groups.

The job-matching event to be held at Pusat Komuniti Setiawangsa is the highlight of the Program Kerjaya UP (urban poor) organised by the Human Resources Ministry via the Social Security Organisation (Perkeso).

“The Program Kerjaya UP Career Program includes job interviews for vulnerable individuals living in urban areas to make it easier for this target group to have a livelihood.

“The highlight of this programme will be held at the Pusat Komuniti Setiawangsa, Kuala Lumpur on April 12 whereby interview sessions by employers from various industries will be conducted to fill 10,305 vacancies, ” said Perkeso chief executive officer Datuk Seri Dr Mohammed Azman Aziz Mohammed in a statement on Friday (April 9).

The programme is a successor of Perkeso’s previous Jom Kerja programme held at various public housing and people’s housing project locations in March this year.

Mohammed Azman said that the Jom Kerja programme had identified vulnerable groups, including the B40, which had been badly affected socially and economically due to the Covid-19 pandemic.

He added that following this programme, Perkeso had cooperated with the ministry and relevant agencies to offer various services to meet the groups’ needs.

Among others, the Program Kerjaya UP will also provide career counselling services, resume and interview clinics, business registration counters as well as advice on entrepreneurship, finances, career training and e-Kasih registration.

“Free transportation will also be provided at selected locations for job seekers who need it, ” added Mohammed Azman.

Meanwhile, employers who hired local workers to replace foreign workers under the Malaysianisation category can get up to RM4,000 monthly.

“Under the Malaysianisation category, local workers employed in sectors with high dependency on foreign workers are also eligible to receive payment of between RM500 and RM2,000 monthly for a maximum period of six months for each worker, ” said Mohammed Azman.

He also said that PenjanaKerjaya UP programmes are being held in selected states outside of the Klang Valley.

Job seekers who are interested can register at https://careerfair.perkeso.gov.my 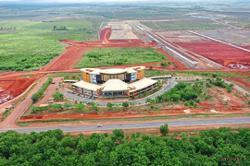