PETALING JAYA: Politicians have called for Undi18 to be implemented as soon as possible as any delay could result in youths losing their right to vote.

One is Muar MP Syed Saddiq Syed Abdul Rahman, who also said the effort to lower the voting age from 21 to 18 was a collective effort by all parties.

“Undi 18 is a joint effort. From the government, Opposition, NGOs and young people seeking their rights, When I proposed it and campaigned hard for it, it is for the youths, not for politics, ” he said in a Facebook post on Friday (March 26).

This comes after EC chairman Datuk Abdul Ghani Salleh said on Thursday (March 25) that the much-anticipated automatic voter registration (AVR) and lowering of the voting age to 18 can only be realised by Sept 1,2022, at the earliest.

He said this is because the Election Commission (EC) is facing constraints such as the movement control order.

In response to this, the former Youth and Sports Minister said that the reasoning given does not make sense.

“We now hear that Covid-19 is used as an excuse to delay Undi18. It does not make sense," said Syed Saddiq.

On July 16,2019, the historic Bill was passed to lower the voting age, as well as to implement automatic voter registration.

However, EC deputy chairman Dr Azmi Sharom had said gazetting the new voter rolls is a necessary requirement with certain procedures to be followed -- such as an objection period -- before a person can vote, and pointed out the legislation to enforce automatic voter registration (AVR) and lowering the voting age to 18 is out of the EC’s hands.

Additionally constitutional law expert Prof Emeritus Datuk Dr Shad Saleem Faruqi had also pointed out that for 18-year-olds to vote in the next general election, and for AVR to take effect, consequential changes must be made to the Election Offences Act, 1954, the Elections (Conduct of Elections) Regulations 1981 and Elections (Registration of Electors) Regulations 2002.

In Sabah, Upko secretary general Nelson Angang said that a general election should not be called for until the Undi18 voters are included

He said that the inclusion of 18-year-old voters has already been gazetted under Article 19(1)(a) of the Federal Constitution and as such any election should include citizens from the age of 18.

Angang added that they may legally do so considering the provision of section 1(2) of the Constitution Amendment Act.

"But it is my view that such prerogative must be exercised before the current parliamentary term expires in 2023 or before a General election is called," he said.

Angang added that the said that there are only 1.2 million people who are between the age of 18 and 20.

"It is not about the numbers but it is about their constitutional rights being prevented in the event an early election is called before the implementation of Undi18," he said.

He also said that the EC must also address the "special issues" concerning Sabah where illegal immigrants with dubious identity cards could slip into the electoral rolls through automatic registration.

He said that even though Upko fully supports Undi18, it is important for the relevant authorities such as the National Registration Department to work together with the EC to address and find a mechanism that those who are automatically registered as new voters are really Malaysian citizens.

"Upko has raised this concern before in several dialogues with the EC concerning the implementation of the automatic voter registration," he said. 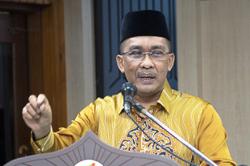