PUTRAJAYA: Malaysia has denounced North Korea’s decision to sever diplomatic ties and in an immediate response, ordered all diplomatic staff and their dependants at Pyongyang’s embassy in Kuala Lumpur to leave the country by this weekend.

In a strongly-worded statement yesterday, Wisma Putra described the North Korean unilateral decision to cut ties as “unfriendly and unconstructive” and that it was against “the spirit of mutual respect and good neighbourly relations among members of the international community”.

“At the same time, the government will issue an order for all diplomatic staff and their dependants at the embassy in Malaysia to leave Malaysia within 48 hours from today, ” said the Foreign Ministry yesterday.

Wisma Putra said Malaysia had the right to respond to North Korea’s decision to protect its sovereignty and to safeguard its national interest, and believes its stand on the matter would be understood by “friends and partners who commit to the principles of justice, rule of law, as well as to peaceful coexistence among nations”.

Pyongyang earlier yesterday announced it was severing diplomatic relations with Malaysia after the Kuala Lumpur High Court ruled that a North Korean man, Mun Chol-myong, could be extradited to the United States to face money laundering charges. 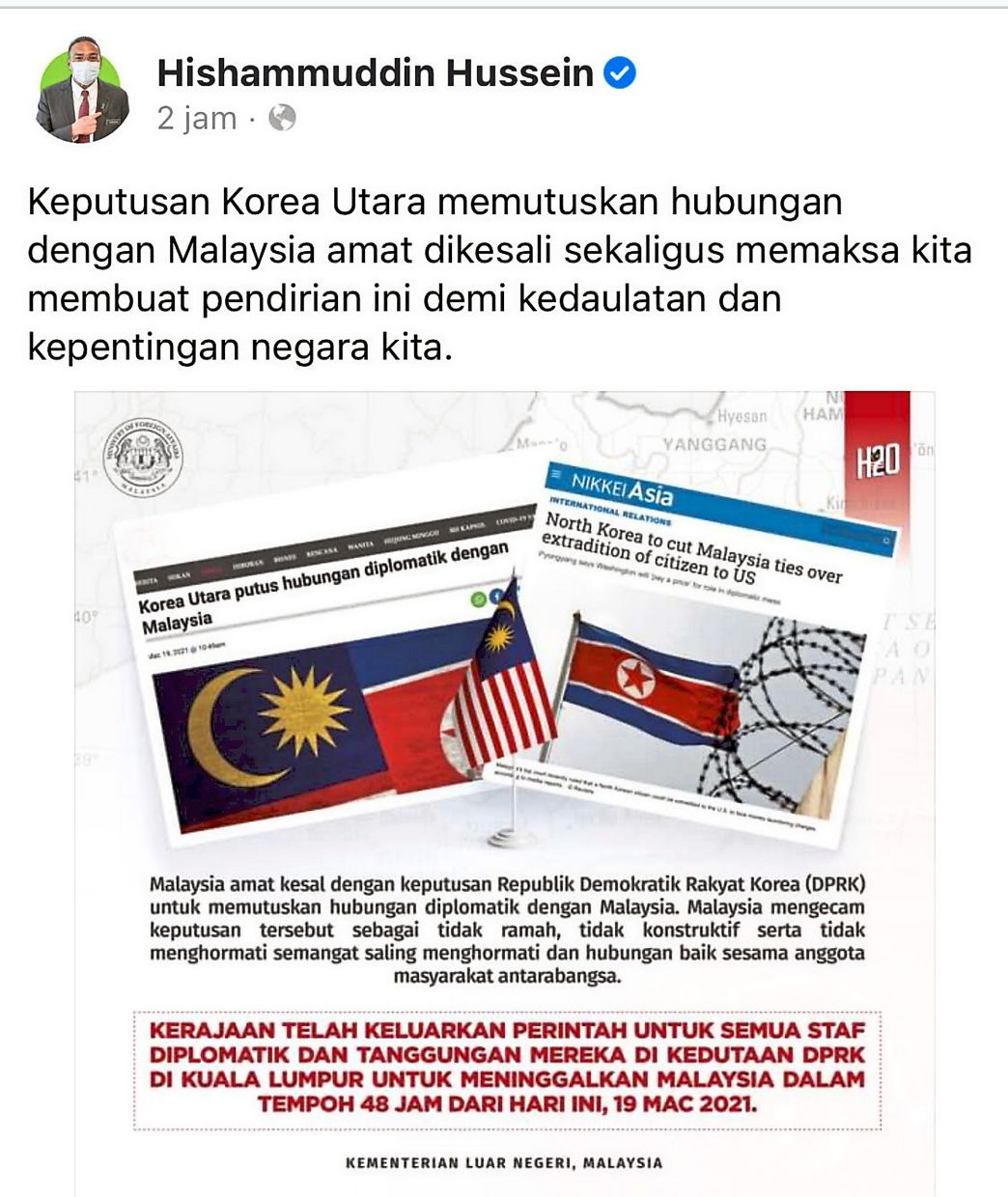 On the extradition, Wisma Putra said the government had ensured that it was carried out in accordance with the principles of justice, rule of law, and the independence of the judiciary.

“On the same premise, the Government of Malaysia had to put aside a series of the DPRK’s demarches for the Malaysian Executive to intervene in our judiciary and legal system. The extradition was only carried out after the due legal process had been exhausted.

“The rights of Mun Chol-myong while in custody in Malaysia were also guaranteed and fulfilled, including his access to his own defence counsel, as well as to consular assistance and visits by his family, ” the statement said.

According to Wisma Putra, Mun was detained on May 14,2019, according to the provisional arrest warrant issued under Section 13 (1) (b) of the Extradition Act 1992 following allegations of conspiracy to launder money and money laundering, as well as violating United Nations sanctions, noting that such acts are also offences under Malaysian law.

He appeared before the Kuala Lumpur Sessions Court on Dec 13,2019, which allowed a committal against him.

His application for the writ of habeas corpus at the Kuala Lumpur High Court on Dec 29,2019, and his appeal at the Federal Court on Oct 8,2020, were dismissed, as the courts found that his application and appeal were unjustified and failed to meet the requirements under the Extradition Act, added Wisma Putra.

Mun was extradited on March 17.

Wisma Putra said that Malaysia had considered North Korea a close partner since diplomatic relations were first established between the two nations in 1973.

“Malaysia was among the earliest to have done so, and continued to support the DPRK during its difficult times. Malaysia had been persistent in pursuing concrete efforts to strengthen our relations with the DPRK even after the deplorable assassination of Kim Jong-nam in 2017.

“In this respect, the DPRK’s unilateral decision is clearly unwarranted, disproportionate and certainly disruptive towards the promotion of peace, stability and prosperity of our region, ” it added.

This is not the first time ties between the two countries have soured in recent years, with a diplomatic row sparking after North Korean leader Kim Jong-un’s estranged brother, Jong-nam, was assassinated at the Kuala Lumpur International Airport in Sepang in February 2017.

The incident happened when two foreign women reportedly smeared his face with a VX nerve agent that is listed as a weapon of mass destruction by the United Nations.