Perak govt to step up security in Gua Matsoorat, where fossil teeth were damaged Datuk Nolee Ashilin Mohammed Radzi said on Friday (March 19) the cave is under the purview of the Ipoh City Council, while the surrounding area is under the Perak State Agricultural Development Corporation.

She said there were currently two guards on duty at the site but they have to patrol a huge area.

Nolee added that security would be increased because the cave is being considered as a new Kinta Valley Geopark site.

“From the report I received, the damage looks more like the work of vandals, instead of an accident.

“We need to find out who or what caused the damage, because from the preliminary investigations, it looks like the teeth and partial jawbone were dug out, ” she told reporters after launching the pre-exhibition of the Perakman art trail at a hotel here.

The Star reported that the fossil teeth of a herbivorous mammal, preserved at the site of their discovery in the cave, had been damaged.

Mohd Fadly had said a group of people, believed to be from a video production company, had visited the cave earlier.

However, the Ipoh City Council said on Friday the company had denied that its video crew enterred the cave and only filmed at the surrounding area.

On the Perakman art trail, Nolee said the exhibition would be held for one month from April 13 at Casuarina Hotel.

She said some 40 artists would display over 100 artworks on the trail, after visits to the “golden triangle” of Grik-Lenggong-Kuala Kangsar to explore, trace and record the heritage of the area.

The exhibition was a collaboration between the state government and the Perak Artists Association, she added. 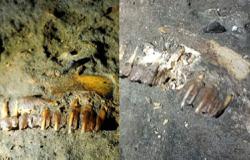