NIBONG TEBAL: The Seberang Prai City Council (MBSP) will take legal action against an illegal beancurd skin (foo chuk) factory in Sungai Jawi that has been operating for about 40 years.

Mayor Datuk Rozali Mohamud said the factory had continued operating despite being slapped with a RM500 compound and a notice to stop.

"MBSP issued the compound under its Licence Payment By-Law 1980 for operating without a valid licence. The enforcement department also issued a notice ordering the company to cease its operations within three days from the date of issue on Feb 19, ” he said on Friday (March 5)

"However, it is still operating and we are gathering information to file the case in court," Rozali added.

It was reported that the land on which the factory sits was zoned for agricultural use under the Penang Structure Plan 2030 and no planning permission was approved for the site.

On Feb 18, investigators from the Health Department were shocked by what they found during a raid and issued five compounds totaling RM8,500.

They found the factory swarming with flies and the carcass of a dead kitten lying mere metres from where workers prepared foo chuk for drying.

Wooden planks were used as dividers in the processing trays for soy milk while dogs were wandering around the food processing area.

It is understood that the factory was under surveillance by investigators for a month before action was taken.

The foo chuk produced by the factory is packed under different brands and believed to be sold locally. 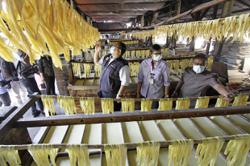