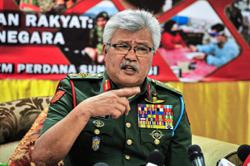 KUALA LUMPUR: Soldiers in Covid-19 red zones will be given priority for vaccination during the vaccine rollout for the Malaysian army, says Army Chief Jen Tan Sri Zamrose Mohd Zain.

“Some 26,500 members of the Malaysian army nationwide will be among the first recipients of the Covid-19 vaccine as part of phase one of the National Covid-19 Immunisation Programme.

“Priority for the vaccine will be given to those stationed in Covid-19 red zones in order to reduce the spread of infection as well as to protect frontliners who are performing their duties, ” he said during a special media interview in conjunction with the 88th Army Day today.

He said the army was ready to assist the police during the vaccine rollout, especially when most of the population start their vaccinations during the second and third phase of the immunisation programme.

“We will do our duty to ensure all Malaysians receive it, ” he said.

Jen Zamrose said the increased powers given to the Malaysian Army during the Emergency period did not mean that they had absolute power to do as they please.

He added that previously, the soldiers did not have the power to question and detain during operations.

The added powers, he said, were provided so that soldiers on duty at Malaysian borders had the power to detain individuals caught crossing the border, be they illegal immigrants or smugglers.

“This is more about providing legal protection to members of the Malaysian army on duty, especially for those taking part in Ops Benteng, ” he said at Kem Perdana in Sungai Besi.

The theme for this year’s Army Day is “Sinergi Tentera Darat dan Rakyat: Tunjang Kedaulatan Negara” (Synergy Between The Army and The People: The Pillar of National Sovereignty).

“The theme touches on the close relations between the Malaysian army and the people, which make up an important element and a pillar for all of us to ensure the country’s sovereignty is maintained and respected, ” he added.

On the Malaysian army’s future plans, Jen Zamrose said that the army’s plan, called “Army 4NextG”, aims to improve the army’s combat, support and service branches in a holistic manner.

He added that the plan, which spanned for 30 years, starting this year, would fulfil the generational needs of the army of the future by taking into account the various aspects of warfare, surroundings and the development in defence technology.