Birth of a city: The King (second from right) and Queen (in blue) looking at a landscape model of Kuantan, Pahang. In attendance are Muhyiddin (left) and Noorainee (second from left), Wan Rosdy (fifth from left) and Hamdan (right). ­ — Bernama

His Majesty, who is the Sultan of Pahang, decreed the appointment of Kuantan Municipal Council president Datuk Hamdan Hussin as the first Datuk Bandar (mayor) of Kuantan.

The proclamation ceremony took place at the Kuantan City Complex, in full compliance with the conditional movement control order’s standard operating procedure in force in Pahang.

In his royal address, Sultan Abdullah expressed his desire to see Kuantan, where the local government system came into being through the setting up of the Kuantan Sanitary Board on Aug 1, 1913, achieve much success and evolve into a city of excellence.

“The establishment of a city is not merely in name. As such, going forward, my state government and the Kuantan City Council must always focus on improving the well-being of and services for the people,” he said.

According to Wan Rosdy, the auspicious occasion harkened back to a similar event more than 40 years ago on Sept 1, 1979, when a young Sultan Abdullah launched the Kuantan Municipal Council as the Pahang Regent.

“That launch back then signified the upgrade of Kuantan to a municipal council from a town council. Today, more than four decades later, it is upgraded again to a city and the proclamation is carried out by His Royal Highness himself once more,” he said.

Wan Rosdy expressed appreciation to the Federal Government for approving the status upgrade during the Cabinet meeting on May 8, 2019.

He credited the achievement to past administrations and especially the contribution of Almarhum Sultan Ahmad Shah, whom he said would drive around Kuantan to review its condition and development.

“Similarly, credit should be given to the contribution of previous Mentris Besar and the government under their administration as well as its civil servants.

“Their effort has succeeded in ensuring Kuantan, especially the municipal services provided, always meets the needs of the local residents,” he said.

Wan Rosdy added that he believed Kuantan as a city would have a large impact on not only governance but also the overall development of the district.

“Kuantan district is expected to continue developing with its own character and appearance as an international city laden with values, culture, history and economic power, thus offering a prosperous quality of life to its inhabitants.

“On par with its status as a city, I believe services to be provided will always be the best so it can continue to contribute to sustainable and inclusive development,” he said. 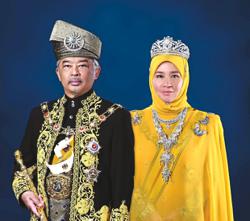