A virtual CNY open house for all

KUALA LUMPUR: The Malaysia Chinese New Year Open House 2021 organised by the Tourism, Arts and Culture Ministry will be held virtually for the first time ever.

Its minister Datuk Seri Nancy Shukri said the celebration on Saturday observed under the new norm would be broadcast through the ministry’s official Facebook @MyMotac and Radio Televisyen Malaysia’s (RTM) TV1 channel at 9pm.

The event will be officiated by Prime Minister Tan Sri Muhyiddin Yassin.

“This year, the ministry continues the traditional celebration under the new normal. Although in terms of scale its organisation is rather limited, Chinese New Year is still celebrated joyfully.

“This initiative allows people of various races to participate, celebrate and share the joy with their Chinese friends in the country, ” she told a special virtual press conference here yesterday.

In addition to highlighting Chinese New Year as one of the traditions of the local Chinese community, Nancy said the open house was the best platform to provide exposure and a general understanding of the cultures, traditions and customs of Malaysia.

“The open house celebration will feature a video compilation of Chinese New Year celebrations from 2016 to 2020, a dance performance called Selamat Datang (Welcome) and a fan dance by Istana Budaya dance performers, as well as performances by guest singers Masya Masyitah and Nicole Lai, ” she said.

“It is hoped that this celebration will strengthen the spirit of unity and tolerance as well, ” she said, adding that she also hoped that the open house celebration could be hosted annually and continued in future as an effort to preserve the country’s arts and culture. — Bernama 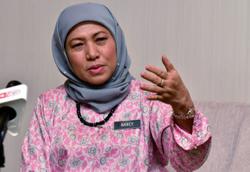