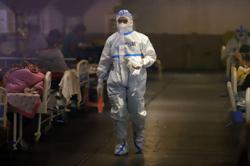 KUALA LUMPUR: Police have arrested a cosmetics company founder in connection with a video of him allegedly kissing a young boy on the lips.

"We have classified the case under Section 14 of the Sexual Offences Against Children Act 2017 for allegedly touching a child for sexual purposes.

"The suspect was arrested Tuesday (Feb 16) and has been released after his statement was recorded," she said when contacted on Wednesday (Feb 17).

A eight-second video showing a man kissing a boy on the lips had gone viral on social media.

In the video, the man is seen sitting on a mat with the boy and claiming that the boy was his foster brother before kissing him on the lips.

The man was later revealed to be the founder of a cosmetics company who had uploaded several videos to his TikTok account.

Further checks later revealed that the TikTok account has since been deactivated.