KUALA LUMPUR: The recent loud explosion heard by many in Sabah is due to a fireball.

This was confirmed by the International Meteor Organisation (IMO) in a report released on its website under event code 632-2021.

He said they received five reports – two from Sabah and three from Brunei.

He said the position of the fireball, when it occurred, was in Papar, Sabah, and the Muara district in Brunei, near the South China Sea.

“It has been confirmed by the IMO. I am confident that the video, shot in Sabah, confirmed that the event was actually a fireball phenomenon. It is like a meteor but way bigger.

“Meteors are more delicate but the fireball is bigger and can be seen during the day. It can be as bright as a half-moon or a full moon, ” Zamri told Bernama TV when contacted.

According to him, through reports received by the IMO, a total of 57 such incidents had been recorded since last month.

The latest, in a district in Bali, Indonesia, occurred last month.

“The phenomenon is called a fireball. It is a rock from outer space rubbing against the earth’s atmosphere and the heat causes it to burn. It either explodes in the air or falls to the earth’s surface, ” he said.

“We think some of the fragments entered the earth’s airspace while some were scorched in the galaxy.”

Asked about the probability of damage caused by a fireball, Zamri said it depended on the size that enters the earth’s airspace.

“If it is too big, it will produce a sonic boom or a loud explosion, similar to what occurred in Sabah.

“Until now, there have been no reports of damage or impact from the incident, ” he said.

During the occurrence, residents around Beaufort, Sipitang, Kuala Penyu and Labuan were shaken by the sound of a loud explosion and a five to six-second tremor. 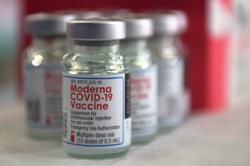