"This is because His Highness has decreed that such buildings possess very high historical value and are tourist destinations," added the statement.

Sultan Sharafuddin said the Sultan Abdul Samad building, which was officiated in 1897 had been the Selangor state secretariat when Kuala Lumpur was the state's capital city until 1974, until Shah Alam became the state capital.

"Looking back, His Highness had worked as a civil servant for the Selangor state government at the Sultan Abdul Samad Building in 1968.

"According to His Highness, other historical buildings such as Carcosa Seri Negara, the Sultan Abdul Samad Jamek Mosque, St Mary's Cathedral, the Kuala Lumpur railway station, the Keretapi Tanah Melayu headquarters, the old Istana Negara and Stadium Merdeka were laced with history involving the nation's formation, with many of them connected to Selangor's early history,'' it said.

It added that the Moorish and Moghul architecture of the historical buildings around Kuala Lumpur had their own unique stories and needed conservation to be valued and appreciated by the future generation.

Sultan Sharafuddin also expressed concern that in the event buildings and monuments such as these were not conserved soon and allowed to be ravaged by time, they would collapse or fall into irreversible ruin.

"In the event that happens, the conservation cost will be higher and will result in the country incurring losses,'' it said. 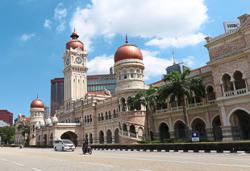