KUALA LUMPUR (Bernama): The decision to implement the movement control order for a second time while providing certain flexibility, especially for the economic sector, has not been easy, but had to be made in order to strike a balance between the people’s health and the economy, says Senior Minister Datuk Seri Ismail Sabri Yaakob.

For the Defence Minister, the MCO this time around looks at the economic importance both through large companies and small-scale traders, while, at the same time, focusing on people’s health.

"We do not want people to die due to Covid-19 (infections), and we also do not want them to die from not eating," he said in an exclusive interview with Bernama recently.

He said there were parties disputing the MCO implementation for the second time, which was said to be more flexible, but in a broader context, claiming the country could go bankrupt if the MCO continues for many years.

"During the first MCO, the country lost RM2.4bil daily. The government also needs to focus on the people who depend on their daily income to make ends meet.

"That is why during MCO 2.0 we allow most economic sectors to operate. The welfare of the people and their safety are equally important, ” he said.

Ismail Sabri explained that although various assistance has been channelled to the people, the government cannot continue doing so, taking into account the long-term effects.

He said the manufacturing sector was opened not to take care of the "big bosses" but because the economic chain involving company operations and the fate of workers should be given priority.

"One-off assistance of RM3,000 is given for small and medium enterprises. By allowing some sectors to operate, small traders, for example, who operate roadside stalls can also do business to meet their daily needs," he said.

"Internet users say we take care of the big towkays but it is related to their employees. If the big boss loses due to the factory not being in operation, then in the end the victim is an employee who depends on that income, ” he said.

Monday (Jan 25) marks one year since the country was hit by Covid-19. The first cases detected involved three Chinese nationals who entered Malaysia via Johor from Singapore that were reported on Jan 25,2020.

The first wave involved a majority of imported cases and not Malaysians, while the second wave of infections involved local transmissions, with the first case of Covid-19 reported on Feb 4,2020.

Following the second wave, the government implemented the MCO, beginning March 18 last year, with strict standard operating procedures (SOPs), and after several months when infections declined, the government began to loosen the SOPs slightly with the introduction of the conditional MCO from May 4, followed by a lot more relaxation (of rules) through the recovery MCO, starting June 10,2020.

When asked whether Malaysia would succeed in flattening the Covid-19 curve after the MCO, Ismail Sabri said that the number of cases would decrease but it would take some time.

"The best way to break the Covid-19 chain is with no direct movement but for now it (public movement) is still happening. Important sectors are allowed to operate on the basis of economic interests.

"Although this MCO is not a complete lockdown, Health director-general Tan Sri Dr Noor Hisham Abdullah believes cases will decrease but it will take some time, ” said Ismail Sabri.

Dr Noor Hisham was previously reported to have said that the country needed at least four weeks to reduce daily Covid-19 infections to between 500 and 1,000 cases a day.

He also said that efforts to flatten the curve of the Covid-19 infection graph in the country are expected to be successful in May or June, and at the same time, the MCO should not be for too long as it has a negative impact on the country's economy.

Meanwhile, Ismail Sabri refuted allegations of the existence of double standards between politicians and ordinary people in enforcement action of the MCO SOPs, for example, in the issue of free movement such as inter-state travel.

"For politicians or MPs, we have our own constituencies. When people are affected by disasters, elected representatives need to take responsibility for them.

"A politician’s job is to meet the people. If an elected representative is not in the field when the people are in trouble, then the politician has failed to carry out his duties, ” he explained. - Bernama 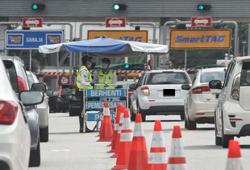