KOTA KINABALU: Internet access and gadgets have become necessities in the teaching and learning at home (PdPR) method during the Covid-19 pandemic.

However, unsatisfactory Internet access and the price of communication gadgets such as smartphones and tablets are the biggest challenges for parents, especially those in Sabah, to ensure the smooth running of PdPR sessions.

Norliani, whose 10-year-old child is following the PdPR sessions, said it was common knowledge that Internet access in Sabah was not at a satisfactory level, especially in the rural areas, while Internet packages were still not quite affordable, especially for the B40 group.

“There is no point in buying expensive or sophisticated gadgets of any kind if the Internet access is problematic.

“But if the Internet access is good but the prices of gadgets are high, the PdPR sessions still can’t go on. All these factors need to be taken into account, ” she said.

Another nurse, Amrata Kumbayat, 46, said her four children, aged eight to 19, had smartphones to enable them to follow the PdPR sessions, but felt that the method could not beat face-to-face learning.

“But now with Covid-19 spreading, we have no choice but to implement the PdPR, ” she said.

She added that apart from the challenges of providing the necessary tools, parents, especially those who work on the front lines like her, needed to divide their time between work and family to help with their children’s PdPR sessions and ensure that the Internet and gadgets were being used properly for learning.

Form Four student Amir Ariq Danie Amir Hasan, 16, said it was a challenge to follow PdPR as he just moved to a new school here from Lahad Datu this year.

“If we want to study well, we’ll have to see our teachers and friends.

“With the PdPR, it is not the same as meeting them face to face. Hopefully, I can meet everyone after Covid-19, ” he added.

Meanwhile, a telecommunications equipment store supervisor, Geeryleon Alimus, 23, said they were busy facilitating the parents’ purchase of suitable mobile phones and Internet packages according to their budget.

“Many parents buy phones for their children at a price of around RM400.

“We sell handphones that are suitable for their children to follow PdPR sessions. If they have a bigger budget, we’ll suggest phones with more functions and greater Internet quota, ” he said.

Edmund Johnson, 39, a computer shop salesman here, said the sale of tablets had increased by up to 75% since the PdPR was implemented and most of the buyers were parents.

He said the store also provided second-hand computers, laptops and tablets for sale to parents with limited budget.

“Indeed, many parents buy according to their budget. The important thing is to have a webcam, WiFi or other functions. We will suggest which items are suitable and we will help them as best as we can, ” he added. — Bernama 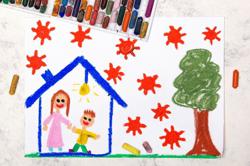