The woman, in her 30s, was caught by security guards at a hypermarket here trying to leave without paying for some food items and fever relief pads for her son.

They lodged a report and the matter quickly got the attention of Asst Comm Nik Ezanee Mohd Faisal.

"We heard about it and studied the issue and realised that we needed to help her.

"So we went over to the hypermarket and asked about what she tried to take and we bought it all and went to visit her at her flat," he said on Thursday (Jan 21).

He said they also brought a care package from the Welfare Department for her family.

He said the woman's son had a fever on Wednesday (Jan 20) but was recovering well.

"We spoke to her and found out that her husband works as an elevator maintenance technician.

"He currently does not have work which is why they are struggling to make ends meet," he said, adding that he believed she acted this way because of the circumstances.

He said they decided to classify the case as "no further action" and advised her to never resort to crime again.

"They are many channels that one can go through to get assistance.

"There are soup kitchens, non-governmental organisations and the Welfare Department as well as zakat aid.

"Even non-Muslims can ask for zakat aid," he said, adding that he advised the woman that if she ever faced such issues and needed help, she could also go to his police station anytime. 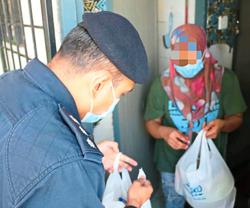