PETALING JAYA: The Datuk and another suspect allegedly involved in an assault at a hotpot restaurant have been released on police bail.

This comes after the police's application to extend their remand was rejected by the courts.

Their lawyer Datuk Suraj Singh said the remand extension application by the police was rejected.

"The investigating officer applied for remand in this case but the court rejected it," he told reporters on Saturday (Jan 16).

Both suspects were earlier brought to the Petaling Jaya Magistrate's Court at about 11am on Saturday.

It was reported previously that the assault victim has been identified as the son of a Datuk.

When contacted, Datuk Kwan Foh Kwai who is Perak Chinese Assembly Hall's deputy president, confirmed that it was his son who was slapped in the incident.

When asked about his son, Kwan declined to elaborate and said that he would leave it to the police to investigate the matter.

Kwan was also quoted by a Chinese vernacular paper saying it was regrettable that this happened.

"We lodged a report the same night after the incident. I am not going to deny it was my son because I do not wish to see unfair posts made about him being circulated online," he was quoted saying.

An argument broke out at the hotpot restaurant in Tropicana Avenue on Tuesday (Jan 12) night, hours before the movement control order was implemented.

Two videos of the incident - one 29 seconds long and the other 51 seconds long - had been posted on social media and both videos have since gone viral.

This led to another round of heated arguments with the man who was threatened earlier by one of the suspects. 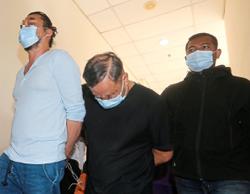