PADAWAN (Bernama): A 63-year-old woman, together with her daughter, saved her four grandchildren when part of their house collapsed in a landslide in Kampung Garung at KM40 of Jalan Puncak Borneo Tuesday (Jan 12) night.

The woman, Nona Budis, said that the landslide occurred at the back of her house at 8.30pm while she was watching television in the living room, while her daughter and grandchildren were in the kitchen.

"Suddenly I heard a loud bang, then the walls of our house collapsed and soil started to fill up the living room.

"Fortunately, my daughter and my grandchildren were not near the television in the living room at that time as they normally would be," she said at her house after Puncak Borneo MP Willie Mongin, who is also the Deputy Minister of Plantation Industries and Commodities, visited her on Wednesday (Jan 13).

Nona said that this was the second landslide incident.

She added in the first incident, clearing work was carried out with the help of Willie and Mambong assemblyman Datuk Dr Jerip Susil.

"Currently we are staying at my son's house," she said.

Meanwhile, in a separate incident, two houses were damaged in a landslide in Kampung Annah Sadir, Padawan at about 3.30am on Tuesday.

The village chief, Sagu Bakong, said that the two houses were owned by two single mothers and that the landslide occurred due to continuous rain since Monday. – Bernama 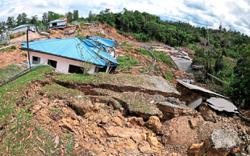