PETALING JAYA: Selangor Perikatan Nasional will continue to strengthen its machinery at all levels in the state to provide stability for the rakyat, says its newly appointed state liaison committee chief Datuk Seri Azmin Ali (pic).

Azmin, who is the former Selangor mentri besar, described the state as progressive and cosmopolitan, and that it remains the main contributor to the country’s economic growth.

“Learning from today’s challenges requires a government that is stable and gives full focus to efforts to protect the welfare and safety of the people.

“Selangor Perikatan is determined to meet the aspirations of the rakyat, ” said Azmin, who is also International Trade and Industry Minister, in a statement yesterday.

Perikatan secretary-general Datuk Seri Hamzah Zainudin, in a statement on Facebook, said all appointments were made by Muhyiddin, who is Perikatan chairman.

Azmin said the Selangor chapter would continue with pro-rakyat policies to drive new economic growth and guarantee efficient service delivery to the rakyat during this challenging period.

“As a coalition of political partners, Perikatan wants to mobilise this effort to improve the country and the livelihood of the people.

“So, I ask all the components, leadership and grassroots activists of Perikatan, especially in Selangor, to quickly come together as a unified team for the benefit of the rakyat and the prosperity of the country, ” said Azmin. 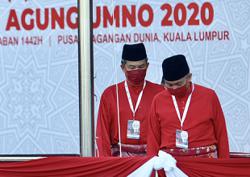