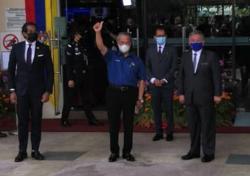 KUALA LUMPUR: The prices of Covid-19 vaccines for Malaysians has been disclosed to Parliament’s Public Accounts Committee (PAC) for the purpose of transparency, says Science, Technology and Innovation Minister Khairy Jamaluddin.

He said both Health Minister Datuk Seri Dr Adham Baba and him, had made available the information to the PAC during an official proceeding on the procurement of the vaccines.

The two ministers, he noted co-chair the Covid-19 Vaccine Supply Access Guarantee Committee and had volunteered to appear before the PAC to ensure transparency in the procurement of the vaccines.

“So we provided as much detail as allowed by the non-disclosure agreement (NDA) signed with the pharmaceutical companies supplying the vaccine.

“We understand there are some concerns on the NDA so although we cannot announce the exact pricing, the government has already announced the total amount to spend.

“However, in the PAC proceedings, I have revealed the exact purchasing price in details.

“I have also revealed documents signed with Pfizer and AstraZeneca with the Malaysian government, ” he said after the three-hour long proceeding with PAC yesterday.

Asked if revealing the information to the PAC would go against the NDA signed, Khairy said it does not as the body is part of the government.

“We consider that the privileged information was shared with public officials, ” he added.

In an immediate response, PAC chairman Wong Kah Woh said the committee was satisfied with the statements by the two ministers, as well as Health director-general Tan Sri Noor Hisham Abdullah.

“The proceeding is in line with the PAC’s wish in ensuring there is transparency in the government spending for the benefit of the people.

“At the same time, the PAC also takes note on the NDA between the government and the vaccine manufacturers.

“Generally, NDA should not hinder the duties and role of the PAC, ” said Wong in a statement.

Wong added in this situation however, the PAC will balance its role in conducting legislative scrutiny with the clauses in the NDA to ensure there is no breach in the terms.

He said a meeting will be held jointly with the Human Resources, Home, and Foreign ministries on the matter at the end of the month.

Rate of infection not slowing down

Urban areas to get Pfizer vaccine