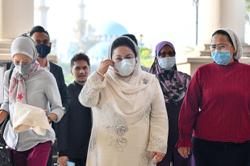 The prosecution, led by senior Deputy Public Prosecutor Datuk Seri Gopal Sri Ram, said the purpose of the said agreement was to "regularise" the bribe that Rosmah would receive.

"The object was to prepare an agreement to conceal the true nature of the payment by Saidi, who is the 17th prosecution witness, to the accused. The euphemism ‘consultancy’ was used to mask the payment of the bribe, ” said the prosecution in its written submission filed at the High Court here, on Tuesday (Dec 29).

Rosmah, 69, is on trial for soliciting RM187.5mil and two counts of receiving bribes totalling RM6.5mil from Saidi, as a reward for helping Jepak Holdings to secure the Hybrid Photovoltaic Solar System Integrated Project, as well as the maintenance and operation of diesel gen-sets, for 369 rural schools in Sarawak, which was worth RM1.25bil from the Education Ministry (MOE) through direct negotiation.

The presiding judge, Mohamed Zaini Mazlan, fixed Feb 10 for the parties to appear before him for oral clarification, before deciding whether to acquit Rosmah of the corruption charges or to call for her defence.

The prosecution, who closed its case on Dec 11, said, if the payment in question was truly a genuine political donation to Rosmah’s husband, former prime minister Datuk Seri Najib Razak, then it was unnecessary to mask it under a "consultancy agreement".

In the submission at the end of its case, the prosecution said the agreement for the solar hybrid project that has since gone missing, was prepared by the 20th prosecution witness, businessman Lawrence Tee Kien Moon.

"Tee is a truthful witness and despite the accusations of unethical conduct hurled at him, his credibility remains unshaken. He is a disinterested witness and his evidence is purely of corroborative value, ” it said.

It said there was evidence that Rosmah spoke to former Education minister Datuk Seri Mahdzir Khalid, the ministry’s then secretary-general Tan Sri Madinah Mohamed and Madinah’s successor, Datuk Seri Alias Ahmad, to facilitate or accelerate the award of the contract to Jepak Holdings and later to expedite payment to the company (Jepak Holdings).

"This evidence fairly supports the prosecution case that the accused solicited for a bribe as a reward for assisting Jepak to obtain the solar contract, ” the prosecution said.

It said the decision of the Public Prosecutor to prosecute Rosmah and adduce such evidence that is lawfully admissible to prove her guilt is not selective or discriminatory prosecution.

The prosecution said the accused’s contention of selective or discriminatory prosecution, which it denied, was not a defence to the charges against her.

"Based on the foregoing, this Honourable Court is respectfully moved to make a finding that the prosecution has established a prima facie case and for an order that the accused’s defence be called upon all three charges, ” it said.

Meanwhile, the defence, in its written submissions filed on Monday (Dec 28), countered that the prosecution had failed to establish a prima facie case because it was abundantly clear that Saidi was the one who intended and offered a political donation to Rosmah.

The defence, led by lawyer Datuk Jagjit Singh, said that the political donation was meant for Najib, as a "gesture of gratitude” for supporting the application by Jepak Holdings, and to ensure the victory of Barisan Nasional during the 14th general election (GE14).

"Since the accused had never instructed and her name was not mentioned at all in the alleged consultancy agreement, a nexus could not be made to the accused, ” it said.

The defence said there was also no credible evidence produced by the prosecution to corroborate the evidence of Rosmah’s former aide, Datuk Rizal Mansor, to prove that he was indeed instructed by the accused to ask for the gratification from Saidi.

"The prosecution has failed to show credible and independent evidence that the accused solicited and received any of the corrupt monies. The truth completely unfolded through the evidence of the three main prosecution’s witnesses Saidi, Rayyan Radzwill Abdullah (Saidi’s former business partner) and Rizal, where their evidence contradicted with each other.