Delivery rider shocked to see dog dumped in a plastic bag, left to die in Cheras KLANG: While waiting to pick up goods for delivery, Rozaidi Hashim was stunned when he saw three men dumping an adult dog at a dumpster at the 12th milestone Jalan Cheras.

The dog was found in a big tied-up transparent plastic bag and brought to the dumpster in a truck, said Rozaidi, 50.

“They dumped the dog and took off. I rushed to the dog and noticed that it had a massive wound in its neck,’’ said Rozaidi who is a delivery service rider.

He then untied the bag and gave the dog some water before frantically contacting a canine rescue organisation to help the dog.

“I was almost in tears seeing the scrawny dog’s pitiful condition.

“How could people dump a sick dog like garbage?’’ said Rozaidi who managed to note down the truck licence plate number.

The rescue group Rozaidi contacted, Malaysian Dogs Deserve Better (MDDB), immediately sent a volunteer to the location to rescue the dog which had by then taken refuge under a drain.

“Our volunteer called the area’s Fire and Rescue Department and firemen managed to get the dog and hand it over to her,’’ said MDDB director and rescue coordinator Irene Low.

The dog was taken to a veterinary clinic in Puchong where it was found to have a serious infected maggot wound in the neck in addition to being emaciated and anemic.

The veterinarian who attended to the dog suspects the wound was caused by a tight chain around the neck.

The dog that MDDB has since named Rozi is currently undergoing treatment at the veterinary clinic.

Rozaidi has since lodged a police report at the Bukit Sentosa police station in Rawang which is near where he lives.

“You can lodge the report at your nearest police station. We must ensure this atrocity and act of extreme cruelty towards the dog is addressed," said Low.

She added the onus was now on the Selangor Department of Veterinary Services to attend to the matter with utmost urgency.

Those who want to know more about the incident can read about it at https://www.facebook.com/MalaysianDogsDeserveBetter/ 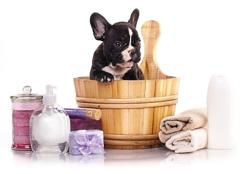