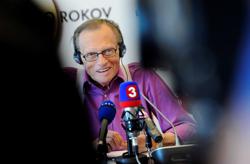 KUALA LUMPUR: The television personality, who was previously detained in connection with a rape investigation, will be rearrested pending investigation on six other investigations.

"We have opened investigation papers under Section 376 of the Penal Code for rape, Section 377C of the same code for unnatural sex and Section 354 for molest.

"So far, seven women aged between 22 and 26 have come forward and lodged reports against the suspect," he told a press conference in Bukit Aman on Tuesday (Dec 1).

The suspect was arrested on Nov 26 for allegedly raping a woman in Shah Alam and was remanded until Dec 1.

"We will be rearresting him to assist with the other investigations," he added.

All of the victims got to know the suspect via Instagram, Comm Huzir said.

"He would chat with the victims via direct messaging on the application.

"He would then ask them out for meals on his capacity as a TV personality to discuss various things, including business matters.

"He would come up with various excuses to then bring them home," he said.

A task force has been formed to investigate cases connected to the suspect, Comm Huzir added.

"We expect more reports will be lodged.

"We urge any victims to come forward as soon as possible," he said.

The Star reported that the suspect, who is a former reality TV contestant, was detained on Thursday for allegedly raping a 23-year-old woman in Shah Alam.

The suspect had allegedly brought the victim to a restaurant in Batu 3, Shah Alam in September last year and to his home in Seksyen 7, to supposedly give a more detailed explanation on how to cure her from depression.

While there, the victim claimed that she was raped by the suspect. The next day, at 6.40am, the suspect had warned the victim to keep the assault a secret," he had said in a statement.

He then escorted her to the lobby before putting her in an e-hailing ride so that she could return to her rented house in Subang Jaya, ACP Baharudin said.

The victim was admitted at Kajang Hospital on Sept 23 last year after suffering from emotional distress. She was also given psychiatric treatment.

She also went back to her hometown in Pahang the following month and she was subsequently warded at a hospital in Temerloh for five days.

The victim lodged a police report on the incident on Nov 25 this year.