PETALING JAYA: Persatuan Patriot Kebangsaan (Patriot) has commended the bravery and swift action taken by the VAT69 commandos and Senoi Praaq units of the General Operations Force (GOF) that foiled a smuggling attempt at the border in Perlis.

A GOF member was shot dead while his patrol partner was seriously injured after they were in a shootout with smugglers at the Malaysia-Thailand border on Tuesday (Nov 24). 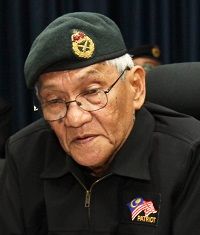 Kpl Baharuddin Ramli, 54, died at the scene while Kpl Norihan Tari, 39, is in critical condition from the 3am incident at the TS9 post along the border.

“Patriot salutes the brave men of VAT69 and Senoi Praaq. We fully understand the challenges and hardship these men must endure manning security posts along international borders.

“Many among our Patriot members had served with the police GOF units before, ” Patriot president Datuk Brig-General (Rtd) Mohamed Arshad Raji (pic) said in a statement Wednesday (Nov 25).

He said that among the hardships faced by security personnel were deployment for long durations, away from their loved ones, with many deployed for clandestine work under very risky circumstances.

“Patriot invites the public to share a thought on the hardships these brave fighting men endure. We extend our condolence to the family of the late Kpl Baharuddin Ramli, ” said Arshad.

The Senoi Praaq, which in the Semai language means “War People”, is a feared and respected crack unit consisting of Orang Asli police officers within the GOF known for their tracking abilities in the jungle and are highly valued by the Malaysian police.

Kpl Baharuddin was a member of the Senoi Praaq.

He and his partner Kpl Norihan Tari were carrying out intelligence work when two groups of smugglers – at least 13 smugglers – set upon them and opened fire.

GOF members managed to arrest one injured smuggler while three others were nabbed by Thai police at a Hatyai hospital later Tuesday.