Wee: Johor-Singapore link will be finished by 2026

All set to go: Dr Wee (centre) taking a ‘virtual’ photo from Putrajaya with Isham (right) and Mohd Zarif at the Bukit Chagar CIQ construction site in Johor Baru.

In a video presented during the virtual groundbreaking ceremony of the mega project and posted on his Facebook page, the minister said that the project would bring maximum positive impact to the people of Johor.

“As the representative of the Transport Ministry, which is the overseer of the project, I assure the commitment of the government in making sure that the project would be carried out effectively and in an organised manner, while also being completed by the set time, which is by 2026, ” he said.

He said the ministry hoped the project would bring positive economic impact to industries such as tourism and real estate, especially in Johor.

“This project will create a rail infrastructure between Malaysia and Singapore that is efficient, cost-effective and integrated with the public transportation system of both countries, ” he said.

In a separate Facebook post, Dr Wee said that the 4km RTS Link functions as a cost-effective transportation system that promises to boost connectivity.

He said it would also provide easy, fast and comfortable access to the people who travel across the Malaysia-Singapore border.

“This would also solve the traffic congestion problem faced at the entry points of both countries that has been going on for years, ” he said. 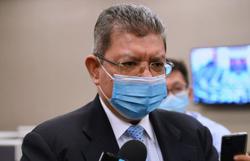