Young Syefura said she would pay the compound soon, and that the police informed her that the case against her was considered resolved.

“I apologise for violating the SOP of the conditional MCO, which to some extent affected the Pahang state assembly sitting.

“I also apologise to all Pahang people for the mistake, ” she said while debating the Supply Bill (Budget 2021) tabled by Mentri Besar Datuk Seri Wan Rosdy Wan Ismail at Wisma Sri Pahang here on Tuesday (Nov 17).

Young Syefura was earlier criticised for uploading a picture of herself and four friends celebrating her birthday on the beach in Bagan Lalang, Selangor, on Instagram, which was later deleted from the social media platform.

Selangor is among the states placed under a conditional MCO until Dec 6, and travel into the state is prohibited without important business for the time-being.

During her debate, Young Syefura questioned whether the data presented to the Pahang state assembly with regards to forest land, namely 2.05 million hectares or 57 per cent of the state's 3.59 million total land area, was accurate.

"I have checked and found that the total forest area has not changed since 2017. Could it be so, when in fact, forest yield is a contributing factor to the state government's income and the amount has been increasing," she said.

Meanwhile, Bilut assemblyman Lee Chin Chen proposed that assessments and land tax for hotel, homestay and restaurant operators be waived for three years, while licence fees for hawkers who lack customers due to the Covid-19 pandemic, should also be waived.

Lee said farmers should also receive special attention because some of them suffered losses when they could not collect farm produce or sell their crops during the MCO.

"I propose for a registration session be conducted for the provision of assistance such as fertiliser and pesticide subsidies according to the land area, thus easing the burden of farmers," he said. 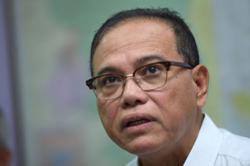