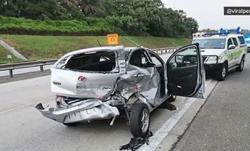 IPOH: Desperate to go home for Deepavali, a man chose to drive against traffic on the North-South Expressway to avoid a roadblock and caused an accident involving two other vehicles.

The 34-year-old was driving to his hometown in Bidor after undergoing a Covid-19 swab test in Klang when he spotted a police roadblock at the exit of the Sungkai toll around 6pm on Wednesday (Nov 11).

Tapah OCPD Supt Wan Azharuddin Wan Ismail said the man, driving a Perodua Axia, decided to go against traffic flow for about 1.4km to avoid the roadblock and causing an accident at KM355.4 of the expressway.

“The driver upon seeing the roadblock, reversed back, and drove against the traffic flow heading south.

“While doing so, a driver of a Toyota Rush on the right lane was unable to avoid the Axia, and crashed head-on and spun a few times, while a trailer, transporting glove-making machines, also could not avoid the car and crashed into it.

“The 25-year-old driver of the Toyota Rush from Kedah, sustained minor injuries, while the suspect and the driver of the trailer were not injured, ” he said.

Supt Wan Azharuddin said the incident had gone viral, and when police arrived at the scene, the driver probably had already moved his car.

He said the driver had been arrested from his house in Bidor at about 11am on Thursday (Nov 12), and the case would be investigated under Section 42 (1) of the Road Transport Act. 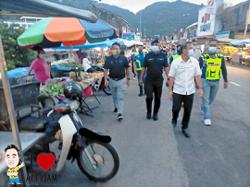